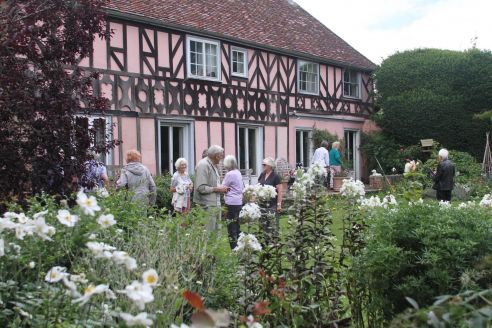 Following an alarming start, - when Barbra’s reminder to the prospective host, Dr. Russell, was answered by his daughter, Penelope, saying that he had died before Christmas, that she had only recently moved in, but would be happy to have us, and generous enough to provide refreshments as well, - preparations went smoothly.

Members were asked to make donations for the refreshments.

This was a very established garden, one of it’s features being the range of huge specimen trees, Pawlonia, Davidia, Catalpa etc. There was an array of box topiary ranging from animals to abstracts and a number of old stone contrasts to the foliage and mixed flower borders. There were also a couple of Peter Rabbits in the border. ( not live ones).

The front boundary was contained within a flowing ditch, also used to make points of interest, and Penelope opened a gate so that we could go through to the village hall, where the local flowers and produce show was in full swing. Another gate took members around the house past an old mulberry tree and to the very pretty church.

When Penelope has had time to impose her own personality on the garden, it would be good to visit again.