The Royal Botanic Gardens at Kew is facing a shortfall of £5m in 2014-15.  About 125 jobs could be cut as the Royal Botanic Gardens in Kew, west London, faces a £5m shortfall in revenue in the coming financial year. Kew Gardens said it had been facing "significant financial challenges" over the last few years and it was working on strategies to boost income. But trying to fill the shortfall by a third will mean "changes in staffing" for the 750 people working there. Compulsory redundancies would be a "last resort", a spokesman said. Visitor at Kew Gardens Also known as Kew Gardens, the site is on the World  Heritage List

The news of job cuts comes as the site saw a 29% rise in visitors last year. In a statement, the Royal Botanic Gardens said: "We aim to fill roughly a  third of the shortfall next financial year through income growth. "We will be working with staff to explore all options including schemes for voluntary exits, reduced working hours and unpaid leave, before moving on to consideration of redeployment, voluntary redundancies or, as a last resort,  compulsory redundancies."

There is a petition on the direct gov website regarding this subject: E-petition - Kew Gardens funding and an article on the web site Change.org

Or do you know someone who does?

2014 is the 50th anniversary of Alan Titchmarsh’s horticultural career and to celebrate, Alan is launching a year-long nationwide campaign to find the country’s 30 best private gardens. The search will honour the outdoor spaces of the nation’s horticultural heroes, who have turned their backyards into amazing spaces and the final 30 selected gardens will be revealed in three primetime, hour long shows, to air on ITV in 2015.
Alan has spent 50 years immersed in the world of horticulture and in that time, he has met every type of gardener, from the passionate amateur to the royals. But Alan understands that to truly appreciate the nation’s obsession with gardens, one needs to look beyond the stately homes and National Trust properties and look to Britain’s private domestic gardens.

Alan and his team will be conducting their search in conjunction with the National Gardens Scheme. Together they will appeal to the public to nominate the gardens of friends, neighbours or, indeed themselves, with all gardens being eligible, big or small, urban or rural, classic or modern.

The series will feature 10 gardens per episode and each show will be loosely based around a theme. Alan will also look at how these spaces reflect Britain’s ever changing relationship with its outdoor space. We are a nation of gardeners and Alan wants to reveal the reasons for our unique relationship with horticulture. He will also meet the people behind the gardens to find out the stories behind the gardens’ creation.
Says Alan, “Britain has the greatest gardeners in the world and the greatest domestic gardens. I want to discover thirty of the best private gardens in the country, regardless of their size, that show off the growing and design skills of their gardeners to brilliant effect.”

Commenting on the forthcoming series George Plumptre, Chief Executive of the National Gardens Scheme said ‘I’m delighted that the NGS will be providing assistance to Spun Gold in helping find examples of the types and styles of gardens that will enable Alan to illustrate the programmes with those that he is most passionate about.’

Applying to the programme is easy – just email This email address is being protected from spambots. You need JavaScript enabled to view it. with some information about the garden (please include its location, size and contact details for yourself – phone and email) along with a few photos of the nominated garden. Or write to Britain’s Best Gardens, PO Box 64382, London, EC2P 2GJ. 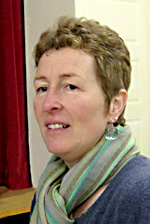 Rosy Hardy is a leading figure in British horticulture and a winner of many RHS Chelsea Gold Medals and we are delighted that our group was able to hear her after our AGM .

She talked on early spring flowering perennials, showing how each plant has to perform well to earn its place in her nursery and then in the garden.

It is rare to attend a RHS flower show and not find Hardy's providing an interesting and innovative display using colour to inspire us to be adventurous in planting combinations in our own gardens.

During her talk she used live plants to show how to get the  best use of early spring flowering perennials in our own gardens.

This talk lived up to our expectations. A fuller report will appear in our Newletter 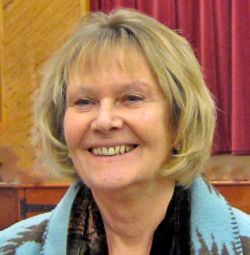 The unique flora of The Galapagos Islands an illustrated talk by Kathy Gray illustrated with photographs by Tony Gray. Kathy and Tony visited the Islands in May 2013 and this a record of their fascinating visit .

It was a bright mild afternoon here in Forncett St.Mary, Norfolk, so I went into the garden and took some pictures. Flowers shown include aubretia, erysimum, geum, hellebores and aconite.

click on picture for slide show -  photos by John Metcalf

About 60 members attended, bringing lots of lovely food to share, all of which drew compliments as we ate.

John Metcalf had set up a very educational quiz (ie: we couldn't do it!) of dead stems. I think the top score was 6 out of 21. ( Training course needed?)

Colin Pusey, his wife, Maria, and Lionel Ponder took care of the raffle, with an interesting assortment of prizes including a pheasant which had grown into a turkey, and back again, during the course of the day.

Ben Potterton was his usual entertaining self, demonstrating the production of three seasonal arrangements which he kindly donated as raffle prizes. This probably boosted the raffle proceeds.  Ben also introduced the self-explanatory term 'spriglet' and said that he was not a 'real flower-arranger', but a 'plonker'. He had a range of very non PC artefacts, which he used to identify the character of some towns and villages within the group, (lynching party from Ipswich?) - and who was it defined by orange string, or the plastic flowers?

We also had an “ideas board”, and book where members could vote for some of our present activities or alternative ones, or write new ideas in the book. These will be considered at future committee meetings to see what the consensus is, and what we can do to brighten up our drab wretched lives!

After lunch, Andrew had devised a set of themes, one for each table of up to 8 members, requesting them to create a flower arrangement, prompted by Ben's demonstration, as a group. A vast amount of props had been provided by Andrew, plus quantities of greenery, dried material and frivolous bits for decoration, as well as quantities of extra material generously provided by members. We voted by placing a coin in the pot for the one we liked best. One group won by a wide margin. Ben presented prizes to the best three. I asked him afterwards which one he thought was best, and he said that the winning one had been 'outstanding' in it's flower-arranging quality. They were all interesting and good enough to take home, so each group agreed amongst themselves who would have their creation, (remembering to return to Andrew any special artefacts after Christmas.)

Thanks to the committee, especially Anita , Cynthia and Andrew for the detailed organisation, and other committee members and the 'usual suspects', plus some new ones, for helping in the kitchen and clearing up. We all had a great day which has started us off towards a very happy Christmas to everyone.