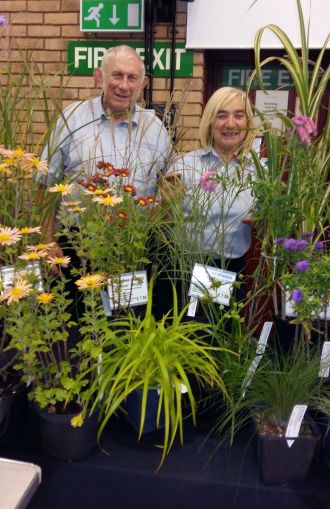 This talk, held on a most summery day, concerned as you might guess all things autumn. It was billed as being a talk by John but after his introduction Gail took over the reins to guide us through their ideas on how to get the best in terms of structure and colour in the autumn garden.

Gail started by talking about first flowering dates and the effects of climate change on these. She went on to give us illustrated examples of what she considered to be the “Skeleton” of an autumn garden, i.e. trees and shrubs. Amongst others she recommended  species we all know such as the Japanese acers and prunus for leaf colour; spindleberry, pyracanthus, sorbus, berberis and cotoneaster for their berries. Less common (to me anyway) were eleutherococcus sieboldianus with its large black fruits resembling giant blackberries and decaisnea fargesii bearing fat blue finger-like fruits also known as Dead Man’s fingers. Her top recommendation was Abelia x grandiflora with its small glossy oval leaves and clusters of pale pink, slightly fragrant flowers lasting well into autumn.

The next selection of plants Gail called “Long term stayers” and these included grasses, verbena and asters. John interrupted the talk here to tell us about a remedy for mildew on asters meant to be a trade secret. It involved mixing up a spray solution of 1 part milk to 10 parts water. Casein, found in milk is the active ingredient for inhibiting the formation of mildew apparently. Gail added that some of the newer varieties of aster were more resistant to mildew. Other plants recommended were rudbeckias, heleniums, kniphofias, euphorbias and some of the ferns.

The third selection consisted of the plants Gail called “visitors”.  These included half- hardy perennials such as fuschias and dahlias and especially salvia “Amistad” with its display of unusually deep purple flowers with almost-black calyces and stems lasting from summer through to autumn. This salvia is also extremely popular with bees and makes an excellent cut flower.  Late flowering hanging baskets were easy way to add some interest and colour in the autumn.

Finally we were given advice on extending the season : making sure plants were healthy, dead heading except where seed and flower heads were to be kept for interest, and mulching were all top tips. The “Chelsea chop” was mentioned as a way of extending the season, late flowering plants also being beneficial to insects. Use of evergreens/conifers and autumn bulbs were seen as useful additions to the autumn garden.