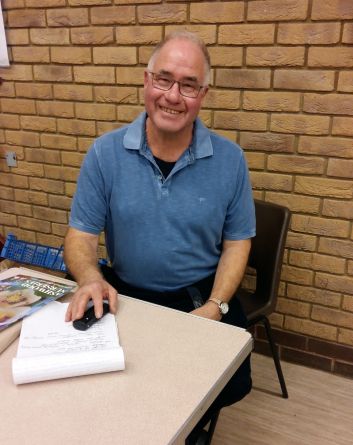 John gave us a wonderful, beautifully illustrated talk, strewn with his own gentle humour and a great deal of information and ideas.
John used the development and planting in his own garden to illustrate his talk.
He said that when the trees were leafless was a good time to assess their shape and required pruning. This was a time to take hard decisions, like when it was time for a tree or shrub to be removed because it was no longer enhancing the garden.He liked to juxtapose natural shapes with topiary, and trimmed holly.

Coloured bark, of silver Betula and Cornus, were complimented by evergreens, such as black- leaved Ophiopogon, Hellebores and various bulbs from late Autumn, ( Colchicums), through Winter (Galanthus).
He recommended keeping deadheads to show the effect of frost, and cutting them back when they became battered, and keeping view- lines clear, especially when use could be made of ‘borrowed landscape’.

Grasses should not be cut back until new growth comes through, and Hydrangeas should be treated with care to protect next year’s buds from frost.
Berries added to the Winter decoration, although many do not last for long. They attract birds, in his case, a flock of Waxwings, which extends interest in the garden. John recommended crab apple, Malus ‘Indian Magic’, whose fruits last well.

He said he likes to create little pictures within the garden, noting the use of evergreen ferns with snowdrops in his stumpery, and large pots, planted with Winter foliage and bulbs, with the addition of dry honesty seed pods and similar decorative items.
The first shrub to bloom after Christmas is Hammamelis, although young, newly planted specimens can be killed by frost before they are established.

John pointed out that the Japanese climate is more similar to ours than the American climate, and this could be used as a guide when choosing plants. Cloud pruning was another way of keeping shrubs under control, whilst maintaining an interesting shape.
Moving onto Spring, John said he used their idea, where gardens tend to be very small, of using the borrowed landscape as background and repeating related plants in places in order to link the garden and background.

He showed us a drift of white Fritillaria meleagris, which he said had all been brought to this part of the garden by the squirrels.
Early Alpine plants were mentioned, and then John’s recent obsession with Hepaticas. He recommended removing old leaves just before the flowers open.

He closed with a series of pictures of beautiful Hepaticas set to the background music of a Chopin Nocturne.
This was very moving as we had only recently heard of the sudden death of John’s young Head Gardener, at the age of 27, and John had mentioned his loss and shown some pictures of them together, with his family, during the talk.