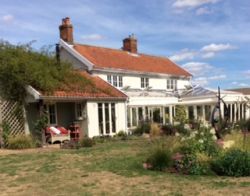 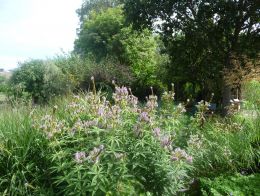 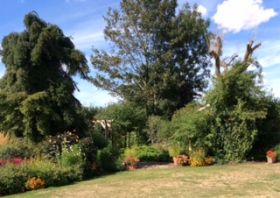 Members were welcomed to the garden by the owners, Linda and Andy Simpson, on a bright, warm day, just after the ‘changeable’ weather had set in, following the weeks of drought.

Linda said that she had a special announcement to make, and proceeded to explain that, after having moved there in 2010, and spent the subsequent years clearing and developing the garden, they had begun to open, and raise funds for the NGS. She had waited to see how many of us would turn up and pay the entry fee, and was delighted to tell us that our contribution had taken their fund-raising to over £10,000.

About 30 members joined the visit. From the first, there were beautiful little groups of plants, adjacent to the front door, and every little corner and nook. As we rounded the house, a charming typical Suffolk cottage, but with the individual character that develops over time, the view expanded across a lawn, with a central bed, notably stocked with pink and white cleome, and a metal sculpture. 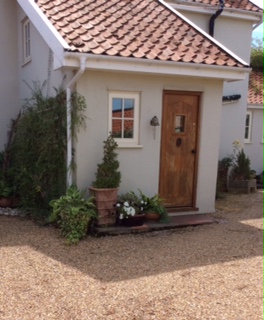 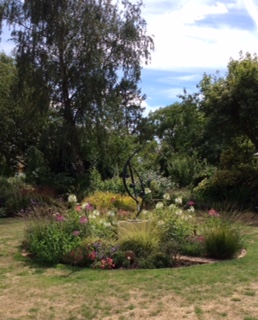 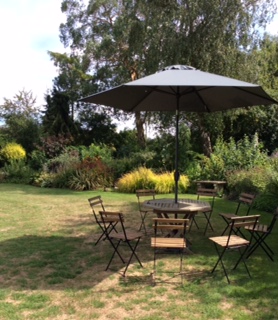 From the lawn, surrounded by interesting plantings of shrubs and perennials, a number of pathways disappeared into the surroundings, although the eye was taken round the periphery by regular splashes of Orange flowers, in pots, set on the edge of the borders.

Everywhere, as we wandered between the plants, there were places to sit and look at a peaceful  view, or the pond, or noisy bird-feeders. Linda and Andy had placed a large pot of Zantedeschia aetheopica in the pond. This was actually floating, although the pot was submerged, and caused a few of us to doubt the evidence of our own eyes, as we saw it gently drifting across the pond, presumably prompted by goldfish nibbling around the roots. 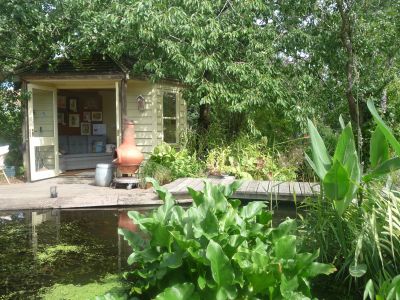 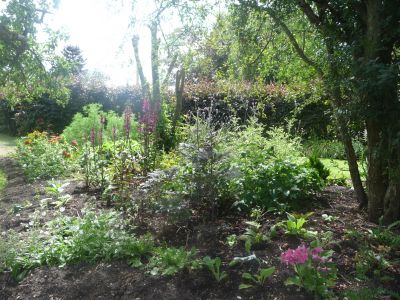 Those of us who like variegated plants were attracted by a clump of Lysimachia clethroides ‘Geisha’, with its pretty, crooked spikes of white flowers and pale cream variegated leaves, and also a bright crimson Phlox, with variegated leaves, P. paniculata ‘ Mary Christine’, with much stronger colour in the flowers than the better-known P.’Norah Leigh’. Both the Lysimachia and the Phlox were growing next to plain green versions of the same plant. Linda owned up that the plain ones were reversion from the variegated, but she had separated the clumps, and they made an interesting contrast with each other. There was also a smart clump of a very pale-leaved variegated persicaria, providing lovely contrast to the green growth nearby. 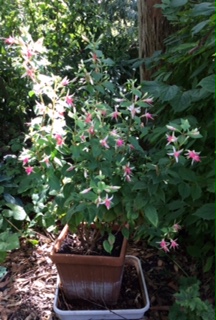 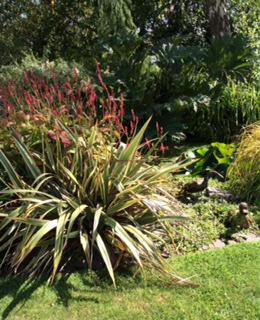 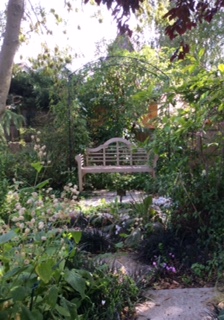 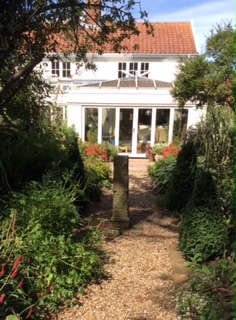 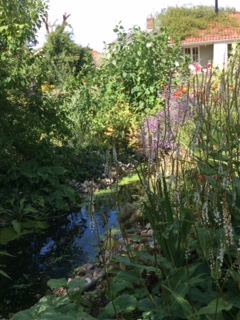 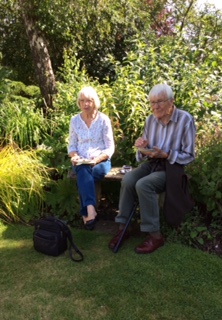 The little pathways led to varied parts of the garden, several in shaded areas, perhaps with an atmospheric, mauve clematis, draped through the trunk of a tree, or a Lutyens-style seat, with clumps of early-flowering cyclamen, in pink or white, blooming against the shiny, black leaves of Liriope nigrescens. There were hostas and ferns in the shade, and heliopsis and echinacea in the sun. A glint of sun on the water picked out a stream, with the sound of a cascade, behind another well-placed seat, chosen by a couple of discerning members to enjoy their refreshments. 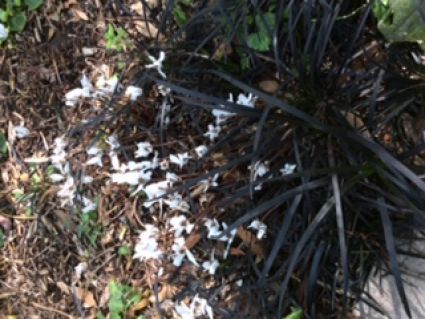 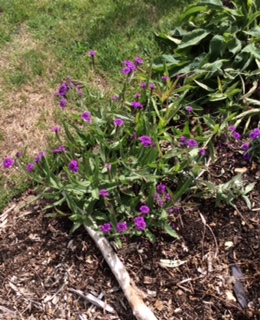 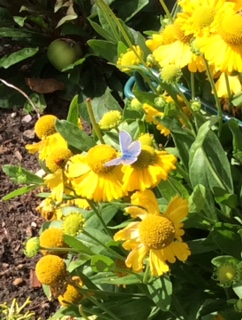 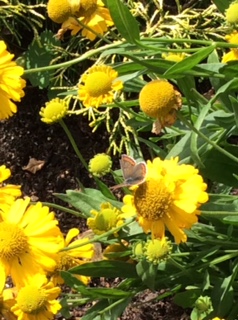 In many places there were surprising little artefacts, all adding to the sense, as one member put it, that this was very much a personal garden.

Linda and Andy had individual vegetable gardens, and the piles of logs, both old and overgrown, providing homes for small creatures and insects, and the smart, fresh ones, no doubt storing fuel for the Winter, added to the individuality of the garden. 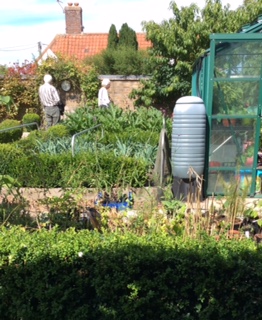 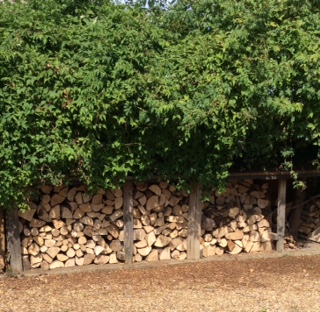 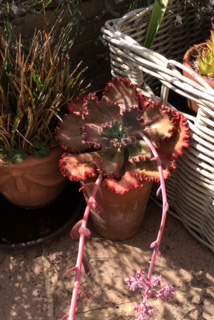 To complete our visit, there was a large table and chairs, shaded by an umbrella, on the lawn, and another large table near the house, where members could enjoy their tea and choice of delicious cakes and reflect on the lovely day and well-planned garden stocked with interesting plants, of which, Linda knew nearly all the names. 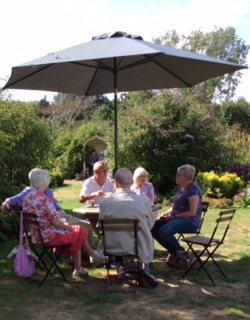 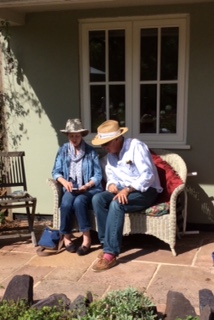 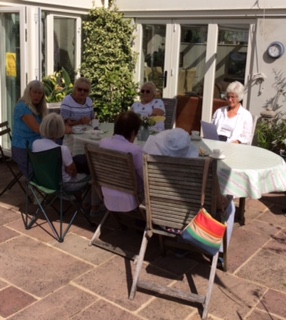 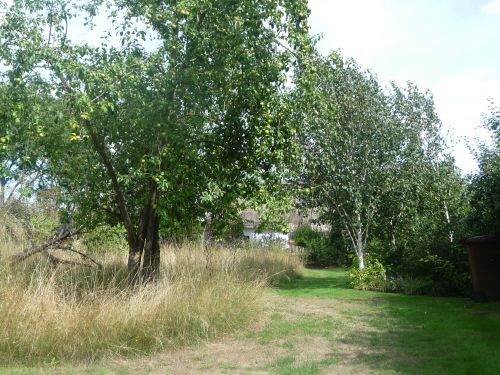