PLANTS OF THE MOMENT – JOE WHITEHEAD 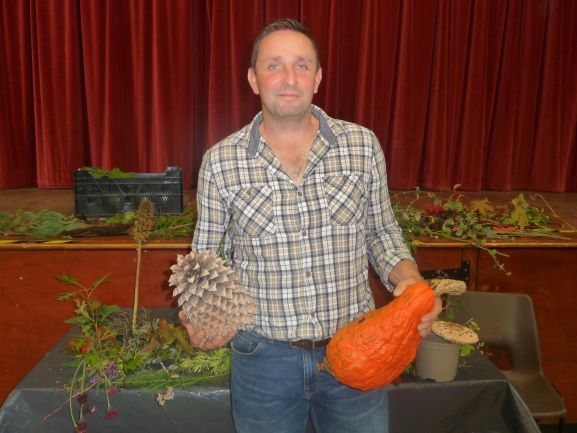 Joe trained at RHS Wisley and during his career has worked at Burghley House, Salle Park, Raveningham Hall, Blatherwycke and has now returned to Burghley as Head Gardener. He told us the estate has some 45 acres and has around 120,000 visitors each year. A Garden of Surprises was introduced in 2007; this is hidden from the outside and is a garden for fun with water jets and a mirrored maze. Joe suggests any visits be taken out of school holiday if you want peace and quiet! Statistics show that Burghley is in one of the driest areas of the country but Joe says they do not currently irrigate the plants but this may change in some areas as they are currently developing large new borders as many visitors used to ask where the ‘gardens’ were located. This being a Capability Brown Garden it was mostly large vistas! The estate has an Oak planted by Queen Victoria and did have a lime planted by Prince Albert but this has been lost. Other Royals have planted trees.

Joe brought along his ‘must have’ tools: snips by ARS; a Max tapener (for tying plants to canes) and a strong trowel by Fossils.

He grows a lot of his plants from seed, some of which come from illicit sources such as compost heaps in important gardens. He came laden with live exhibits which he proceeded to strip for seeds and cuttings for members to take home with them. He says they make a mixture of 50% peat based and 50% grit or Perlite for growing cuttings.

Joe started his ‘exhibits’ with a huge pine cone – one of the biggest of all from Pinus corporii. One of these trees has now been planted at Burghley but will take 10 years to produce a cone.

He then went on to talk - and show examples - of honey fungus as an example of a secondary infection on trees; he said it moves around in the soil so if discovered a barrier should be dug to contain it. He also showed us Beefsteak fungus which looked revolting. He said it is found on Oaks but the tree will create bands around its trunk to increase its strength to resist the infection.

After a quick look at squashes he showed us another vegetable, Blitum capitatum or strawberry spinach, which looked far too pretty to eat.

Now we were on to poisonous/dangerous plants with ideas on how they could be prepared for use! We looked at Ricinus communis ‘Cardamine Red’ - the castor oil plant – which provides late season interest with its fabulous colour. Cestrum nocturnum ‘Queen of the Night’ which is highly scented at night. Then Rubus biflorus which will keep most animals or children away with its prickly stems.

From the tropical borders we saw Tetrapanax which may give you lots of plants as it suckers everywhere. Dahlia imperialis which flowers in December and can reach 12 feet in height but isn’t hardy. Tradescantia ‘Maidens Blush” very easy to take cuttings. Dahlia merckii, grown from seed, will flower all summer. Datisca cannabina, a beautiful soft hemp plant. Helianthus salicifolia tall and erect with a yellow daisy like flower. Ipomoea lobata, a very pretty annual climber with red flowers. Rudbeckia subtomentosa ‘Henry Eilers’ which had vanilla scented foliage and quilled petals and was very beautiful. He introduced Teucrium as a good alternative to box hedging.

He brought several Persicarias including P. Indian Summer; P. polymorpha (which he says smells so bad you should keep it away from a path); P. amplexicaulis alba and rosea for late summer interest and lastly P. Red Dragon for its beautiful foliage.

He brought some salvias and recommended that shrubby perennial salvias be cut back by 1/3 in spring. He showed S. uliginosa which provides late summer interest and S. elegans wich has a pleasant smell like pineapple.

Some others: Verbena ‘Bampton’ – wonderful planted with roses; Cirsium heterophyllum; Vernonia for tall late flowers; Veronicastrum latifolium for its trailing habit; Aster Kaliope and Little Carlow and Aster x frikartii ‘Monch’ as the latter is not susceptible to mildew; Solidago caesia - a blue stemmed solidago - will tolerate part shade.

For these tall plants he suggests a ‘Hampton Court chop’ which is like the Chelsea chop only later. He finds this makes the plants less likely to need staking and encourages later flowering.

The grasses he recommends are the ‘see through’ type Oryzopsis – Indian rice grass and Molinia ‘Transparent’.

He brought Hydrangea paniculata ‘Vanille Fraise’ and recommends removing ½ the growth on this each year; Buddleia x wariana ‘Moonbeam’; Parottia persica with bright red flowers in February but needs lots of space and of the conifers he brought Cryptomeria elegans which can be clipped and grows fast – when it goes brown don’t panic this is its nature; Quercus palustris -The Pin Oak Tree - which is only suitable if you have a large estate!

NB I think I drew the short straw volunteering for this write up with all the names spoken by Joe and not on any overhead crib! Apologies for any inaccuracies.