This has been a year for some astonishing displays of blossom. Brenda Foster took these pictures in their house garden, Gable House, Redisham, Beccles, which just give some idea of the amount of flowers to be seen on many trees. Here are a couple of pictures of a catalpa tree in their garden.

Some pictures of a very enjoyable day.

This relatively leisurely trip (compared with John Foster's) began, as usual, at Notcutts Garden Centre at an early hour on Wednesday 3rd July. Members gathered round while Alisdair loaded the overnight bags, then boarded the coach. When we were all on board and ready to go, organiser, Linda, made a head-count, which gave her one more than expected. A recount gave the same result. She then carefully announced which trip it was and asked if we were all on the right coach. No response! Linda then made a roll-call and we all dutifully answered to our names (even though John Metcalf said 'No', when asked if he was present). Baffled, she then asked if anyone was present who's name had not been called and a quiet little lady put her hand up. Linda looked at the 'paperwork' and discovered that she was booked on a completely different (day) trip and her coach was not due to leave until 8.00am! (We asked her which trip she would prefer.) So, as soon as Linda had raised a volunteers for the day's write-ups, we started again and set off towards Kent and Sussex.

Alisdair's reliable, careful driving allowed some of us to catch up with our sleep whilst traversing the M25 and we duly arrived at one of the 'extras' that Linda had fitted in, Sissinghurst. It was evidently of as much interest to those who had visited recently as to those who had not been for sometime, or perhaps ever before. We discovered some muscles we didn't know we had climbing the spiral staircase to the top of the tower.  This gave an excellent view of the gardens, which helped us get our bearings once back on the ground.

Lunch above the restaurant was well organised and very welcome. Afterwards there was a little more time to catch up with the garden and see the shop and plant sales before leaving for the object of the exercise, Great Dixter. My abiding memory is the astonishing display of plants in pots around either side of the porch.

I was a bit shocked when Fergus Garrett told us that they were changed every two weeks. He uses these as a training exercise for students in putting together an effective group of textures and colours. Something he can quickly criticize and they can quickly improve. The garden room system is familiar to Norfolk gardeners, but here it is so innovative and worked on so intensely that it generates a vast amount of information on plant combinations, which we encouraged Fergus to commit to paper. His forward planning, which I think he called 'mind-plans' were inspiring, and I imagine the write-up will reflect this.

We arrived at the hotel, (after Alisdair had tried to deliver us to another one,) and had a good supper of soup and sandwiches and delicious little desserts, which exercised our minds whilst analysing the ingredients, especially the lavender cream, which had a mixed reception. Beds were large, breakfasts were even larger. Some members took advantage of the swimming pool, and perhaps the other exercising options.

It was sad to think that we were on the way home already. However, the day was certainly not an anti-climax.

Lullingstone Castle provided us with a visit to, (and long description of) the church and house, followed by a rather rushed gallop round Tom Hart-Dyke's World Garden, with Tom as guide. This was impressive and interesting, much enlivened by Tom's enthusiastic lunacy. (See write-up.) We naturally found time to visit his nursery and buy some mementos of our visit before making a dash to the marquee for a good lunch of sandwiches and cake.

Alisdair then drove us home to Norfolk (and Suffolk), having made it early enough to avoid the overturning lorry on the motorway, arriving only a little later than scheduled because of our unwillingness to leave the gardens.
Many thanks to Linda for arranging this extra-special trip for us. We also hope that the stowaway had a great day, as well as a story to tell her friends.

Once again, John and Brenda Foster put together a very busy four days of garden and nursery visiting for us. We saw a most beautiful private garden, Dipley Mill, on the way. A sandwich lunch was provided while the owner talked to us about the garden. It was very well suited to its site and showed a depth of feeling for the house which it surrounded.  (See  write-up in later newsletter).

The hotel, where we spent the three nights, was very comfortable and the staff were very cheerful and helpful. |It was rather amusing on the last evening, when John beckoned them to him to accept the collection we had made for them. There had been a minor issue over the selection of desserts, and this had been exercising their initiative somewhat, so, when John beckoned them, they thought they were about to receive a reprimand. You can imagine the smiles of relief!

All the days were sunny and very warm. The hotel had both indoor and outdoor swimming pools , which we looked at whilst sipping our G&Ts. (some people even took a dip).
The gardens will all be written up, (but not in the imminent newsletter), but all had there points of interest. Even Kingston Lacey, which had suffered massive damage during the winter storms, had made huge efforts to get the garden in a fit state for visitors. The Knoll Garden, which advertised itself on its grasses, which didn't particularly attract me, turned out to be a lovely garden, making very good use of grasses, rather than focussing on them. Compton Acres, on a rocky hillside, with waterfalls, was a complete contrast, as was  Abbotsbury semi-tropical garden, which was highly- coloured and even had a terrapin on the base of a water feature, of which there were many. We also visited the nearby Swannery, where the swans and other water fowl are very tame, even with chicks about. We had tea at Athelhampton House before returning to the hotel on Sunday.

On the way home we visited MacPennys Nursery to buy plants to fill the remaining few spaces in Alisdair's luggage space, to a garden centre for lunch in Alton then on to another private garden, Fairbanks, where the knowledgeable owners showed us round and gave us tea and cake before we returned home.

( I have mentioned all of the gardens, but not necessarily in the right order!) Many thanks to John and Brenda for arranging another very enjoyable trip at a very reasonable price. Please send your photos to John Metcalf, if you haven't already done so.

These pictures were taken by Colin Pusey. A report will follow in the next Newsletter

Liz Nicholls and Shirley Baxter, accompanied by Shirley's husband, Graham, and Liz's brother, David, had the signs up and their fee-gathering table set up in very good time and did a very efficient job of collecting the cash and the e-mail addresses. More people came than expected, so both hosts will have been happy with the results
We were very sorry to be told that John Alston had had a severe stroke during last year, and , whilst he had recovered his speech, was still unable to show us round the garden. He kindly described what we would see looking good and provided us with tour guides in the shape of two gardeners, Nathan and James.
We were also given a brief history of the coat of arms, which contained 16 'quarters' of the arms of other families which had been added to the Alston family arms.
Wisteria, Magnolias and other early flowering shrubs were very visible. We were surprised by the buds on Delphiniums in the walled border. The Guinea fowl were surprised by us and made a hasty exit through a grove of bamboo beside the huge pond.
Mr Alston had been very welcoming, but had also said he could do with an inch of rain, which, sadly, he didn't get today.

Over the longer lunch break that Linda had arranged for us, I spotted a few members at Peter Beales Nursery, and others owned up to having made it to Walnut Tree Nursery.

At Seamere we were met by Judy Watson, who showed us 'her cowslips', which turned out to be an almighty field full of them, This was part of a Stewardship project, which included a dipping pond.
The garden brought forth anguish and envy on a number of fronts, I noticed, with the range of really interesting plants, including a pretty parasite. Judy usefully explained that Lovage can be used for celery flavour in soups etc. Following a very interesting guided prowl round the mere, the various areas of the garden, and again, with a brief history of the house, Judy served us  very welcome tea and cake ,but not before I had snapped Graham by the moongate. 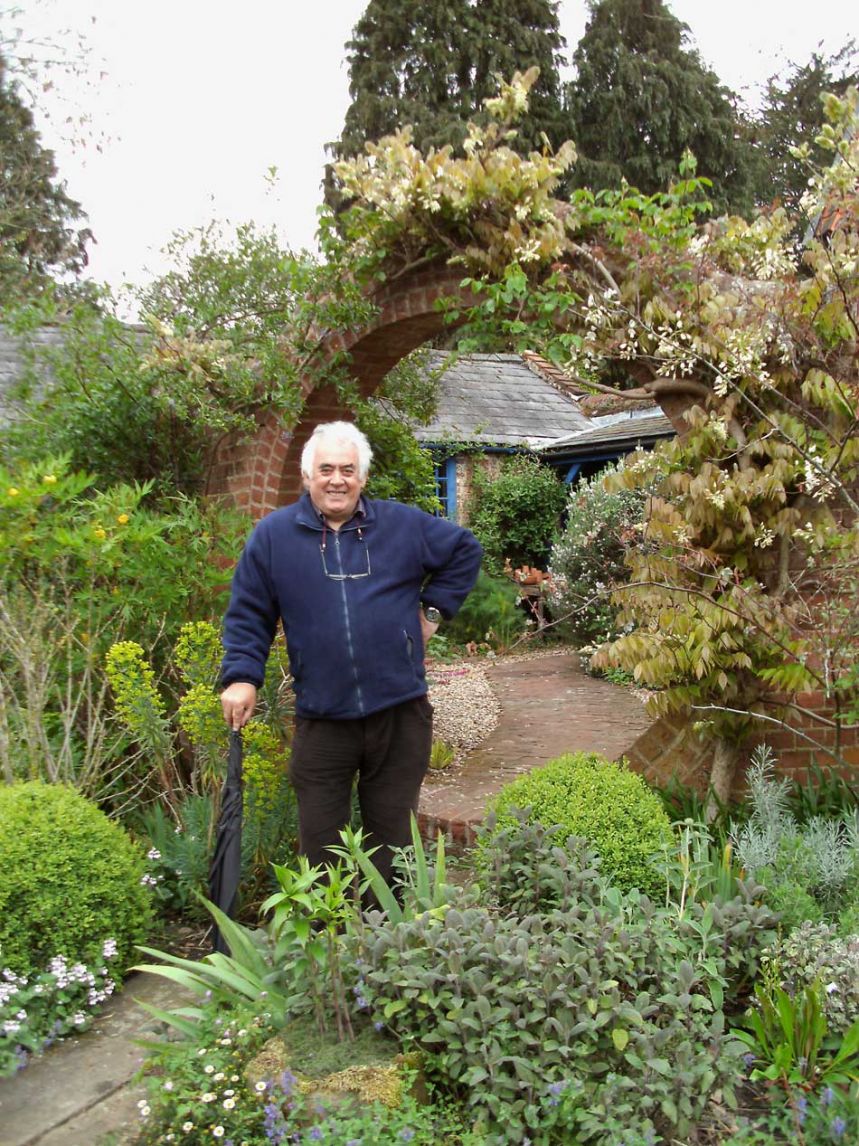