Rosemary Roe welcomed us on arrival and gave a brief history of how the garden has developed.

The original field was full of bramble and fallen fruit trees so her farmer father helped to level and clear the land. To provide a windbreak she planted leylandii, which she later regretted, so as a Christmas present 15 years ago, her farmer brother removed the 53 trees! Rosemary apologised for any weeds and for the ground elder but said she maintains the garden herself with help from Doug, her gardener. We were informed that ground elder can be eaten! The green in front of the farm is a private green, one of only six in the country.

On retirement, Rosemary did a 5-day course on garden design which she found most beneficial so she started to develop a spring border. When the farm was sold 8 years ago she purchased a small parcel of land from the agent. On return from a visit to Highgrove she developed her own hexagon water feature to be viewed from her window. The garden borders are kidney-shaped or curved and billowing with herbaceous perennials, shrubs, roses and trees. Hidden paths meandered through the beds.

A pond with a seat, facing the setting sun over the open countryside, had a bed of extremely large and well-kept hostas with no sign of slug damage. Ligularia “The Rocket” positively zoomed skyward.

The stumpery was lush with ferns, honeysuckle and Hydrangea arborescens “Annabelle”. The courtyard had containers of pelargoniums and the gravel garden was suitably planted with Mediterranean style plants. There was also a newly planted meadow and a small vegetable area.

I particularly liked the idea of attaching a piece of guttering to a wall a couple of feet off the ground which was planted up with various house leeks - most novel.

Doug, who is passionate about hostas, had many planted in containers and there was the added bonus of some to buy. He had a few I did not know. A tip he gave on the healthy state of the hostas by the pond was to give a generous mulch to them just as the spikes begin to burst forth from the ground. This feeds the plants and also deters any molluscs. He feeds the container hostas well and also uses a liquid deterrent for small molluscs to douse the plants and stop the leaves being eaten.

We were also able to visit the local church, King Charles the Martyr, which had a little bellcote and Georgian interior, luckily hardly touched by the Victorians. The dedication to King Charles I is one of only five in England. The barrel organ, still in use and dating from 1810, is the only remaining one in Suffolk. An unusual feature in the church were the complete set of box pews with matching triple-decker pulpit with reading desk and clerk’s pew. Doug was overheard telling someone about the church and referred to the pews as pigsties!

Since we had already claimed that last year's was the best ever holiday that John and Brenda had arranged, I was wondering how they would follow that.Members who went will have no doubts. We might wonder how good it could have been if it hadn't rained on us most days, but I think we will soon forget that, especially as the photographs don't look as though they were taken in the rain, apart from people's clothing and umbrellas.

Leaving from Notcutts, we had a different driver, Steve, as Alisdair has really, really retired from overnight trips! We wondered how much Steve had told him about us.It rained on the journey. We had a sandwich lunch in a big marquee, then looked at the garden, Dyffrin, near Cardiff in the sunshine (most of the time).It rained again as we drove to the hotel, and Steve dropped us at the door, after exhibiting some of his driving manoevres. ( There were several examples, during the holiday, some of which raised a round of applause.)

Rooms were good, food was good and staff friendly and helpful.

Monday dawned dry, to our surprise and stayed so for our visit to a garden that had something for almost everybody. It was a water garden, with operating, though small, water-wheel, filling a bucket chain that carried the water up a home-made stone tower, where it filled a cistern which then poured out of the mouths of two home-carved stone creatures' mouths. There was also a huge and fascinating cuckoo clock, with accompanying bird song, all water-powered, and an igloo- shaped building made of up-ended wine bottles, sealed between ribs of masonry. Inside was a reflective pool which picked up the colours of the bottles with the light shining through them. Alone, one would find it enchanting. There were ferns growing around the back of the pool, which added to the ambience. Several members suggested this was a dangerous garden for me to see. After a quick coffee, and having ransacked the little nursery we rushed on to Hergest Croft, lunch, a gallop round the garden, full of wonderful trees and an educational kitchen garden - gooseberries and currants grown on espalier wires at waist- and head-height, avoiding the need to bend whilst picking. Here again, was a wonderful little plant sales area, offering an excellent selection of home- grown trees, plus grafted Acers, and many other plants. John had been unable to resist taking us to the Red Kite Feeding Centre, since it was quite close, and we had to leave to get there at the appropriate time. It was more interesting than we might have supposed. We had to wait a while in one of the long hides overlooking the feeding area. The Kites were huge, and we were able to compare them with Buzzards and the many Rooks that came in to scavenge, although these were far outnumbered by the Kites. Hitchcock had nothing on these!

On Tuesday morning there were some long faces after the football results, but we visited Glansevern Garden, where an enthusiastic young woman told us about its features and encouraged us to enjoy it. There were lovely borders, a woodland walk with interesting specimen trees and shrubs, a path to the River Severn, a folly, a huge bronze hare, nearly as big as Graham and a grotto under a hill, crossed by a decrepit set of steps, which resulted in Helen calling to me, "Are you alright? Don't drop your iPad."

We moved onto Powis Castle, arriving in the rain, and divided into two sittings for lunch. The impressive terraces were still worth seeing in the rain, and we had the house to see as well. It was here, that, in conversation with another member and a steward, she asked if the little red soft- toy dragons were for sale in the shop. Steward didn't know, but our member explained that she had wanted a dragon for a grandchild and, unable to find a pattern,  she'd bought an elephant pattern, and started from there!

On the return trip, Wednesday morning, we stopped at Birmingham Botanic Gardens, again in light drizzle. It has a sensible tearoom, giving a view across a large part of the gardens. A brisk trot round the peripheral path, past the cottage and it's garden, round the pond and rock gardens, through the butterfly house and aviary, not to mention the rose garden, Palm house, and hard to find Bonsai exhibition, brought us back to the cafe, shop and plants for sale. Steve kindly brought the coach to the door of the building, and we left a little earlier than planned, since rain had stopped play, and arrived in Norwich in good time.

Thanks again, John and Brenda for your time and energy in arranging yet another holiday for us. It is much appreciated.

It was a cold gloomy Saturday when members arrived at Frythe Barn, Stradbroke to be met by Mrs Carol Darling who showed us around the 2-acre garden and described its transformation in 9 years from a series of brick and concrete buildings to the interesting garden it is today.  We wandered through the living Willow Tunnel to the spinney which had several bee hives and appropriately, flowering bee orchids which are now naturalizing around the garden.  Continuing past the bog garden, we arrived onto the main lawn where there were colourful mixed borders and several grass beds, the latter with Stipa gigantea, Stipa tenuissima, Miscanthus, Festucas and Pennisetums among the plantings.  The main feature on the lawn was the large pond with waterlilies, fed by an artificial stream, and with colourful planting on the banks – outstanding were the pink flowers of Butonus umbellatus and the apricot heads of a candelabra Primula.  This was a very enjoyable garden with lots of interest and the equally enjoyable was the excellent tea and cakes provided by Mrs Darling. 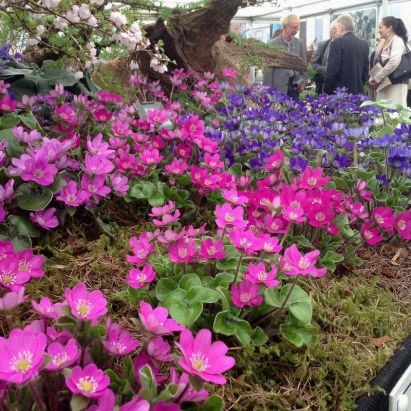 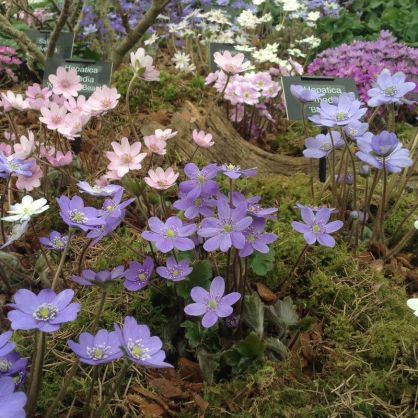 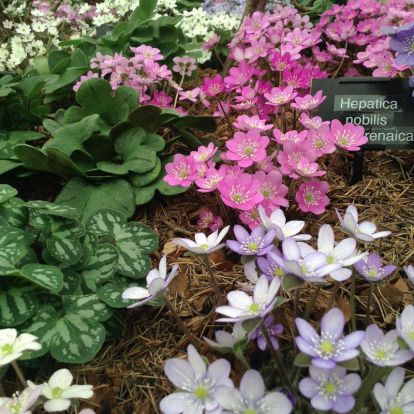 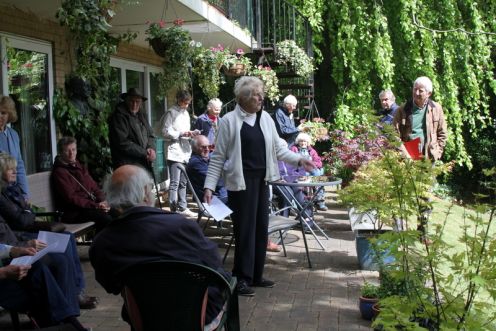 Janet Muter, our welcoming host, gave us a brief introduction to the earlier history of the site and garden, including the other Brundall Gardens and a description of her own work to resurrect her garden, noting how the borders of the ponds were not easily detectable at first.

The house is almost at the top of the site and looks down across the three ponds to the lake, with waterfalls and a huge fountain. The soil suits rhododendrons and has a beautiful framework of a variety of mature trees, including several coloured beeches and a cut-leaved beech. ( There was one tree not quite in leaf that wasn't identified, so it will be interesting to see if it's in the Newsletter write- up!) There were huge Zantedeschia aetheopica coming into flower, beautiful candelabra primulas, ferns unfurling and a number of shrubs and perennials in bloom, from tiny creeping toadflax, lovely blue Lithodora, many geraniums, through rhododendrons and azaleas just about to open. The path to the lake was intermittently bordered by bluebells. Janet aims to have plants worth seeing throughout the year. At the lake was a shingle beach with a picturesque, but probably essential, little boat. A small flock of Canada Geese left the scene when some of our members arrived.Janet had said she was keen to maintain a garden providing habitats for wildlife

On our return to the terrace we were provided with tea and biscuits, care of Janet's daughter, and the offer of discounted copies of Janet's book, called 'Rescue of a Garden' published in 2015.