The participating members of The Hardy Plant Society

What a treat we had in store when Liz and her brother David welcomed us to their garden. They have been restoring both the house (dating back to the 1800s), garden and land for the past six years. The first task outside was to remove neglected trees and hedges before the serious planning and planting could begin. David told me the garden was so overgrown that you couldn't see the house originally from the end of the drive. Although this is a relatively new garden one can certainly see the potential and what the future holds. We parked our cars in their field to the right of the drive where there was also a large pond with a duck house floating in the centre and their own secure pen.

On this beautiful sunny, hot day there was a buzz and noise from chattering and socialising members. Before we explored the garden further Chris called us all to order to announce that we could start buying plants which members eagerly pounced on and there was certainly a wide selection to choose from and all at bargain prices. Purchases safely put in cars it was time to resume touring the garden.

Beyond where we held the plant sale was a large expanse of lawn surrounded by flowers beds, some surrounded with formal box hedging, the insides waiting to be planted up. The newly-planted boundary hedge had well-staked young trees. Double parralel beds with Birch dark cherry down the centre of each and containing shrubs were underplanted with hellebores, prumula, daffodils, bergenia, fritillaria and Stipa tennuisima waving in the cooling slight breeze. This avenue led to the guinnea fowl in their pen. In the lawn was a young tree which was surrounded by a circular metal seat on a grey loose slate floor. In line with this further down the lawn was a matching metal gazebo. A large semi-circular hedge planted with fagus sylvatica and holly was divided with another matching metal arch.

The field adjoining this part of the garden had some wonderful hebredian sheep from the Isle of St Kilda. On another side was a soft fruit cage and a flint-walled garden used for storage at the moment but no doubt ready for the next stage of development. Overlooking this was a large weather vane of a fox chasing some white geese.

Whilst looking up at the weather vane I noticed a large number of nesting boxes under the roof and David told me these are for the swifts. A little fact I did not know was that swifts only have little legs and never land in their life except for nesting!

A courtyard, bounded by the stable block and a wall of the walled garden, had a long slate rill. It was denude of water at the moment as a leak needs to be rectified. At the top of the courtyard stood the greenhouse with various large stone troughs and a rockery for alpine plants and in front of those were pots with beautiful old tulips. This is another area recently constructed and awaiting to be fully planted up. Wonderful large metal trellis were already planted with young plants waiting to reach their full potential.

Beyond the courtyard through a gravel area was a large bird feeder. The boundary bed contained betula, Sorbus aria 'Lutescens', Cornus 'Elegantisima, C. 'Kesselringi, C. Flaviarama with rosa rugosa at the back and underplanted with periwinkle, aubretia, epimedium and dark leaved heuchera.

This then led through to a lawn and many of the trees had bird boxes. The relatively newly planted boundary hedge here contained a mixture of various holly - box-leaved, blue, variagated and 'Golden King'.

Passing through an arch in the hawthorn hedge was a wood chipping path with some formal box edging to a bed on the right, then a well-placed seat looking across the garden, and a naturalistic bed of daffodils, pulmonaria, cowslips and symphtom which led to the working area of leaf bins and large well-constructed compost bays. The trellis at the end of the path had been planted with Rosa 'The Generous Gardener, R. 'Iceberg' and R. 'Casino'.

Given a few years for the trees, shrubs, hedges, plants etc to mature and develop this will be a spectacuar garden and I would love to visit it again but everything done so far has been to a high standard. I must just add that Liz also provided some lovely tea and cakes for us to enjoy. Thank you Liz and David for allowing us to visit.

As the weather is so gloomy just now I thought that a backward glance at some sunnier moments might bring some warmer thoughts . These are photographs taken on a visit to Sicily of some of the ancients ruins still standing amongst the landscape and the abundance of flowers around them.

It is with great sadness that we report that Bill died on 14th November 2014
There will be a service of Thanksgiving at Bergh Apton church (St.Peter and St Paul) on Friday 5th December at 2.30pm.
No flowers please. Donations to Parkinson's UK, may be sent to R. B. Copping Independent Funeral Services

Bill was a founder member of the Norfolk and Suffolk HPS Group. There will be a detailed tribute
to his horticultural life in the Spring issue of the Group Newsletter.

Clematis 'Henryi' was one of the early hybrids created as part of an attempt to get the largest possible flowers on clematis.  In 1855 Isaac Anderson-Henry of Edinburgh crossed C. Patens and C. Lanuginosa and obtained the white-flowered 'Henryi'.
It is early-summer flowering with a second crop later in the year.  It doesn't grow too tall - about 3-4m, depending on how hard it is pruned.  The main attraction is the flower which is 15 to 18cm across with 8 sepals that barely overlap.  What adds to its interest is the contrast of brown-tipped stamens against the pure white of the flower.  Each sepal has elegant veining from tip to base.
In his book on clematis Christopher Lloyd states that it is a 'difficult' plant and he does not like it.  However, he does admit that it never grew for him. 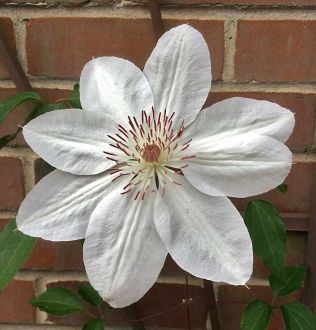