Could all members that intend to come on our future garden visits please let our Chairman Chris Davies know in good time either by phone or Email so that we can plan tea & cake etc many thanks. 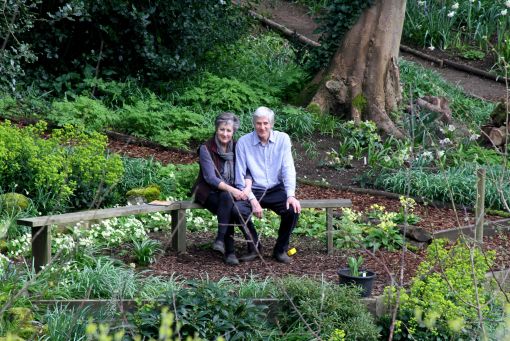 I have totally misappropriated this expression with regard to our visit to Sue and Graham Allison's garden at Thorpe St Andrew on 9th April.
It didn't even wait until Sue had taken members on the tour of the garden. It rained all day!
Sue had arranged for the wet boots etc. and started with a talk about the 6 year development of the woodland garden since the spring of 2010, backed up by a loop of photographs on a screen. Members then had tea and a choice of excellent cakes baked by our host Sue, served by Sarah and Barbra, ( both new committee members), interrupted only by the late presentation to Geoff Wilson of some garden vouchers, which he should have had, along with his commemorative trowel, at the AGM, but the vouchers had been omitted due to the change in Treasurer and lack of responsibility of either for the purpose.
After tea, brave members followed Sue, with their brollies, across the original, lawned garden, with large topiary creature, to the beautiful wooded valley, developed over the last 9 years, bright with narcissus and leucojum, newly emerged leaves on some shrubs and trees, the astonishing scarlet berries of Nandina domestica, among others, down the gentle hairpin bends and up the shallow steps, all supported by wooden edgings, very much in keeping with the nature of the garden. It looked very clean and fresh in the rain and occasional bright patches.
Members then returned to the drive, where a dripping Andrew and similar Colin manned the Plant Sale, assisted by other members of the committee, and helpful individuals.
Sue was able to send £200 to the NOOK Appeal, ( Childrens' Hospice), and the Plant Stall raised £157, plus a late bit, for Group funds. Many thanks to Sue and Graham for hosting, committee for supporting and members for bringing and buying plants and attending in this weather.

Daffodilis in my sisters garden. 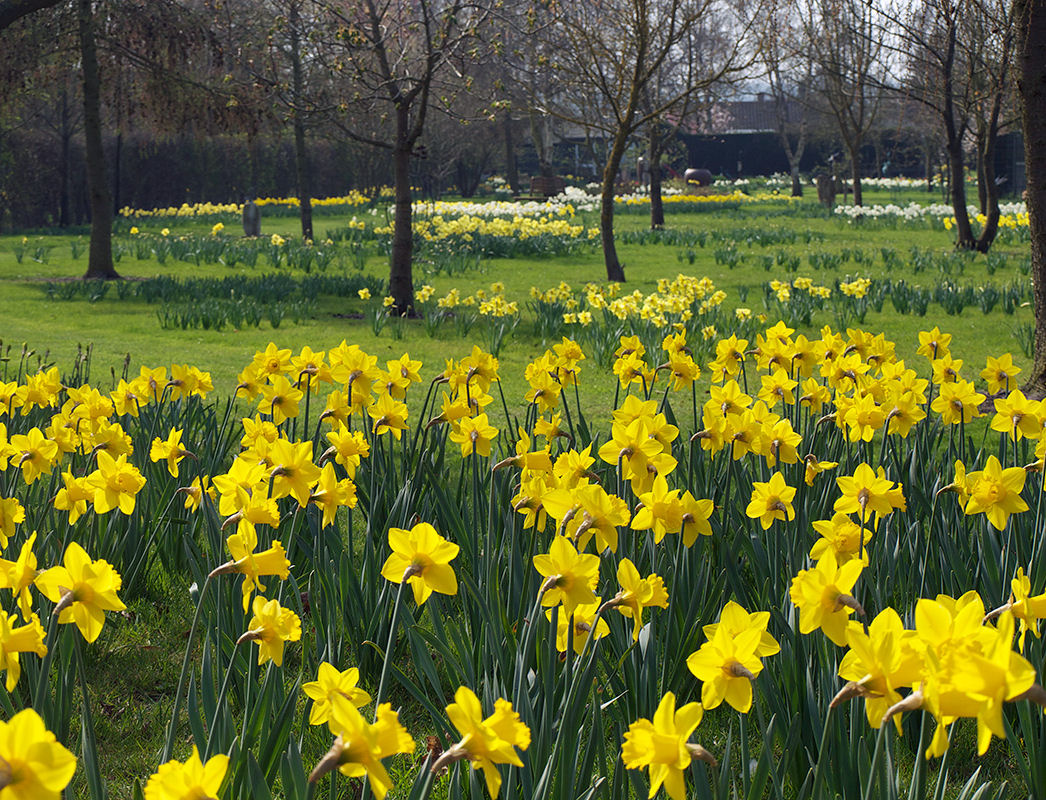 A select 20 members arrived at the Hall, to be greeted by our host, Mrs Soper, who was a kind and thoughtful fellow gardener, accompanied by the enthusiastic gardener, Rachel, and the equally enthusiastic but not so knowledgeable dog.

We were given a brief history of the garden by Mrs Soper, and a guided tour, showing the work of Dr and Mrs Soper, and more recently, Rachel, in constucting the garden features, including a recent cascade and fernery/stumpery, adding to the pond, courtyard, sensibly-sized walled vegetable garden and other attractive areas, all planted by them, except for some of the mature trees. There was a lightweight flat-bottomed boat which had been made by Rachel for working on the pond, and a sculpted, but convincing Hosta.

Unforgettably, tea and coffee was accompanied by a choice of three sorts of cake. A great end to the garden visits for this year.

Many thanks to Liz Nicholls and Shirley Baxter for organising this and the previous visits during this Summer.

Apparently there was a rumour going round that I built the flint walls in my garden. This was confirmed by my husband, who made all the mortar, for the purpose, for the last 31 years. It seemed that this took members' minds off the areas of my garden which were not up to scratch, owing to the lack of gardening time during the past 5 years for a number of different reasons (excuses!).

Members were positive and kind in their comments and found some plants to look at that interested them, mainly the Colutea x media, with small orange pea flowers, and inflated seed pods, not yet ripe, the Clerodendron trichotomum variegatum, with its delicate pink tinge and pale pink buds, but stinking leaves, if you touched them, and my random collection of Hydrangeas, which was providing a lot of the colour just now.
The party found its way back up the lane to Sue's garden, where perfection reigned in the garden, followed closely by the quality of food provided by the committee and ex-committee member, Shirley.

Food was taken into the garden where members found their own little glade, in small or larger groups and in places Sue didn't know she had. Her collection of grasses was admirable, even I am now convinced to try some other than Miscanthus sorts and Festuca glauca. There was only one complaint; apparently there was not enough orange!

Three new members made this their first meeting with us. I do hope they come again. There were also three other quite recently joined members, who will have had a bit more time to meet other members with similar interests. Suzanne and John brought their dog, Sargent, who is an associate member.

A kind gardening friend of mine, Rita, who has not quite managed to join HPS yet, for some of the usual domestic reasons, came all the way from Beccles to help with the food, and apparently did all the washing up at Sue's. Her dog, Frankie, spent the day, (between walks round the garden) with my dogs, in our sitting room. Several members asked to see both my dogs and Sue's three, who were also in a safe place during the day. Pauline also spent almost all the time in the kitchen, at both houses, and she and Colin organised the lunch queue, with help from Sue Thurman.

After lunch, the raffle was called, which made some money for the Group, as did the Plant Sale. Members were invited to return to mine for a cuppa before they went home, and some did. Members generally, very kindly, said that the day was well organised and that they had enjoyed it and the lunch. Many thanks to the committee, especially Pauline and Rita, for this.

Sue now doesn't know what to do with herself. I am continuing with the usual gardening, and will have more time from now on, since I am reducing my activities elsewhere, but, as I told David and Brian, I have reached the age when I sometimes sleep during gardening hours. It's been good to have the deadline, though. I've achieved a lot, and will aim to get it all under control before the Winter (if not the next meeting!). Thank you all for coming. I hope you enjoy seeing the photos. Pauline already has an idea for next year's event. We have a committee meeting in a couple of weeks.