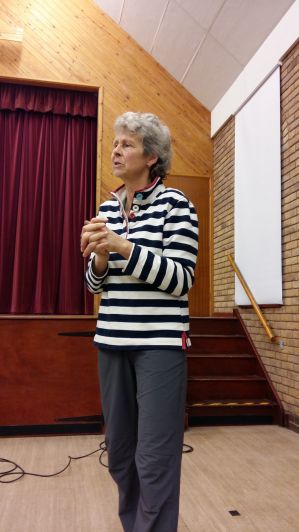 Jane Lister, of Hoecroft  Nursery and Garden, at Wood Norton, Norfolk, talked of the development of the nursery and gardens over the past 25 years, illustrated with slides from photographs taken by Brenda, who described herself as ' head- cook and bottle-washer'.

The Nursery focuses on ornamental grasses of all shapes, sizes and colours, and plants with coloured foliage, whether trees, shrubs or herbaceous.

Jane described combinations of trees, shrubs, grasses, other foliage plants and flowering species and varieties that would create an interesting effect at any time of the year.

Much of her material was evergreen, or gold, or perhaps pink, white and green, and showed what could be done with very few additional flowering plants, dwelling more on the shapes and textures, and contrasts of stems, leaves, seed heads and forms of growth in differing habitats.

Jane gave us a huge amount of information in the time, and a long description of plant combinations, which are more fully noted on the account in the forthcoming Newsletter.

Jane told us that the Nursery will be closing this year, but the garden will be developed further, for visiting groups. Take advantage of this place while it is still there! 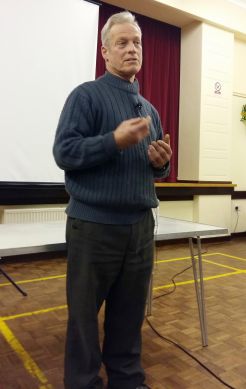 Barry is locally well known as a down-to-earth experienced gardener.

He advised members to compost all garden waste a and leaves, which he finds makes useful compost, unturned, in two years.

He summarised his own strategy for an attractive garden, saying that he believed in using common plants because they work. He likes to use a mix of shrubs and perennials in borders and throws out plants that don't do well.

His own garden is modelled on the Bressingham notion of 'island beds', and includes tall plants, like Verbena bonariensis, that allow the other plants to be viewed through them.

He has included a number of star performers, for example, Daphne 'Jaqueline Postill', - evergreen, with shiny foliage and good early scent, in March.

Barry included special plants like some species of snowdrops, which flower in December.

He noted that his garden, in Santon Downham, on the Brandon to Thetford  road is in no way a naturally sheltered garden, noting that the temperature on one night last week read -7C, and that in one of the recent bad winters, it had descended -22C.  Barry likes paths to meander through the garden and avoids them looking like aircraft runways!

By growing a great many plants from seed, Barry has taught himself what works, without great expense, and provided himself with knowledge of a huge range.

He advised collecting seed and sowing it as soon as possible, keeping seed trays and seedlings in a cold- frame through Winter..

He recommended buying plants in Autumn. These would have been grown on since Spring and  could be divided and planted from September until the weather gets too bad, to give a better and more cost-effective display, the following year. He reminded us that plants might still need watering during Autumn.

Barry recommended using  pea--sticks for staking, advising that the tops should be bent over into the centre, where they would soon be grown over. Barry grows his own bamboo!

He also recommended circular wide wire mesh plant supports with long straight legs, and mentioned having used copper piping, which corrodes and could deter some pests.

Barry showed a range of slides, describing the advantages of different styles of growth and flowering habits.These are described in the more detailed write-up which will be published in the next Newsletter.

Cathy Rollinson spotted a comment that Don Witton made in the autumn edition of The Hardy Plant about Euphorbia epithymoides “Midas” being a good contender for our Conservation Scheme: “my favourite form of my favourite species, but it is becoming scarce…”
It is currently listed by 3 nurseries in the 2016 Plantfinder and he has included a photograph of the plant at Avondale Nursery although it is not listed for sale in their 2017 online catalogue.
Does anyone grow this plant in your group if so please give Chris a ring .

If you are very interested in Heucheras, our National Chairman, Cathy Rollinson is looking for an expert among the HPS membership to assist with the RHS Trial.(Request has come from Graham Rice.)
If you know a member you would recommend, or are interested yourself, please contact her (see back of journal for email) or contact Chris Davies, who will forward your message. 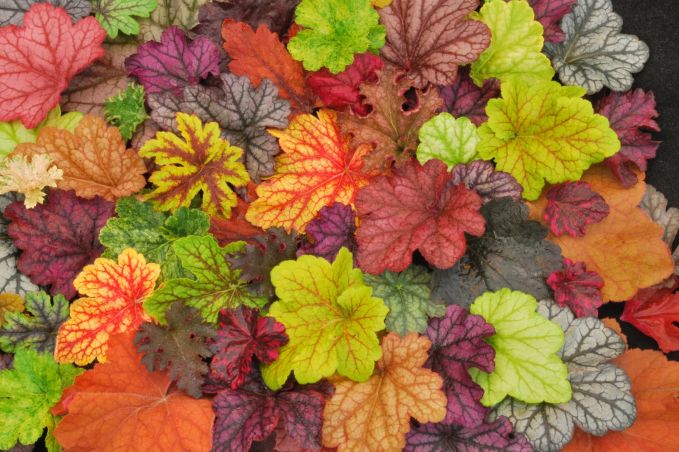