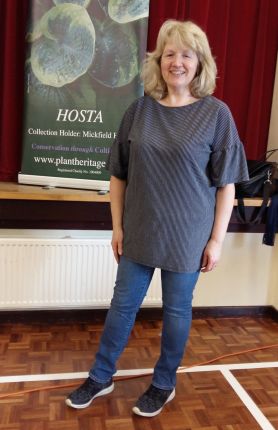 Mickfield Hostas is a family-based micro business, which has grown out of a collection of the genus Hosta. Check their amazing website www.mickfieldhostas.co.uk for plant combinations and where to position. Watch the mini movies and even sign up for their informative newsletters. They attend many shows – check their website for full details.

They hold the largest Plant Heritage National Collection of Hosta in the UK and offer over 1,000 different species and cultivars for sale, grown peat-free, at their nursery, which is open throughout the season in the village of Mickfield, in Suffolk.

In 2011 they were awarded their first RHS Gold medal at the Malvern Spring Flower Show. Many more awards have followed since.

In 2016, their 40th Anniversary Year, they were awarded gold at Harrogate, Malvern, Hampton Court, Tatton Park, Sandringham and BBC Gardeners World – quite an achievement.

Mel’s talk was very informative and explained Hostas belong to the Hostacae family. Large varieties prefer to be in the ground rather than containers. If hostas are gown in containers she recommended placing the container in a shallow tray of water with a gap between the tray rim and container. It is snails that damage hostas and they cannot swim!

A full write-up will appear in our newsletter later in the year. 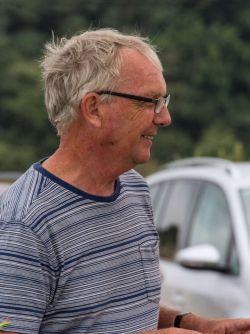 Richard kindly stepped in when our original speaker Joe Whitehead was unable to attend.  Richard came straight from the 'Radio Norfolk' studios where he had been a guest on the 'Garden 'Party programme.So on a cold dreary grey February afternoon we were transported by slides and a uplifting and wonderful talk on Spring and early summer bulbs and plants.  Within minutes we were there in a spring garden.  Some of which were new and are firm favourites and we have in our gardens and some that we have now added to our list of desirables.Richard took us on a journey of colour and scents - some more appealing than others.  He described and explained the origin and homelands of these species that we have come to expect and take for granted to see in our gardens.  By understanding the origins of these flowers and plants this should help with the citing and long term care to enable year after year enjoyment.  The variety of Spring and early summer bulbs for all areas and condition within our gardens was truly amazing.Richard and Sally were kind enough to also bring along lots of plants for us to buy and as always additional advice in plants and aftercare.